Nashville, Tennessee franchise owner Joey Bossier has the honor of being awarded the 100th Bin There Dump That franchise territory in the network and taking the brand to new heights.

One-hundred years is recognized across all cultures as an achievement worthy of celebration. Billboard Magazine charts the best music in the world by the top 100 songs, and as children, getting to hold a 100-dollar bill made you feel as rich as a King.

Sticking to Your Vision

Bin There Dump That has had its eye on this number since the day it began franchising in 2001. The network has grown exponentially since then, beginning its growth in Canada then blossoming throughout the United States.

“Our roots are in Canada, certainly, but we've seen our network grow the most in the past five years within the United States”, stated Mike Kernaghan, President and CEO of Bin There Dump That. “We are truly a North American company”.

Bin There Dump That's commitment to growing their franchise network within the United States manifests itself by hiring hard-working people with a passion for business and for the communities where they live and work. Contributing to a growing US economy and providing a business opportunity for enthusiastic entrepreneurs from all backgrounds keeps Bin There Dump That motivated to continue to grow their brand across the country. 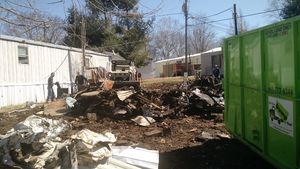 “Joey Bossier has been part of the Bin There Dump That family for the better part of four years and in that time has contributed to both the franchise network and his community in very positive ways”, says Mike.

Music to Our Ears 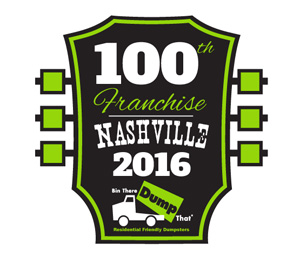 Joey Bossier, franchise operator in Nashville, Tennessee, was certainly overwhelmed by the news that he was the 100th new location in the Bin There Dump That franchise network.

“I'm a bit taken aback, I must admit”, said Joey. “The planning that goes into a celebration like this is a bit more than I'm used to, but it's certainly exciting and I'm honored to be the location that pushes Bin There Dump That to 100. It's pretty cool.”

Joey Bossier has owned and operated his franchise since 2013 with the hopes of one day expanding his territory. The situation presented itself this year and Joey knew it was a significant addition to his growing business – but one he needed to commit to.

“I always intended to grow larger than I started from day one. Everything I've done up to this point was building up to expanding my territory and I'm happy it worked out the way did. Not knowing it would become the 100th territory when I decided, but I'll take it!” says Joey.

In the past year Bin There Dump That has seen two significant milestones achieved; ushering the 100th production vehicle into the system and awarding the 100th franchise territory. These achievements serve to highlight the hard work, dedication and brand equity associated with Bin There Dump That as customers from coast to coast in North America recognize that a dumpster company can be more about a residential-friendly service and less about simply delivering a metal box.

“The experience of renting a dumpster from any of the locations in the network is replicated many times over, and they all amount to the best experience in the industry. From the moment an order is placed online or over the phone, the needs of the customer are first and foremost. It's what separates us from the competition”, said John Ferracuti, COO of Bin There Dump That. John attended the 100th Truck celebration from Bin There Dump That New Orleans location.

“It's dumpster rentals, yes, but it's so much more…”

“Being at an event such as our 100th truck celebration, in a territory that was new to the franchise network, it became clear that our brand and our business model are embraced wherever we open,” said Ferracuti.

“It's dumpster rentals, yes, but it's so much more to that family who has to clean up after a disaster, or for the general contractor whose trailer got a flat and need a dumpster to remove waste from their job site.”

Bin There Dump That Nashville supports Tucker's House, a local charity that provides renovations and support for families with children who have physical disabilities.

Joey Bossier teamed up with Tucker's House to provide dumpsters on all the job sites during the renovations. Its gestures like this that keep Tucker’s House operating and doing what they do best. The entire Bin There Dump That network pitched in and helped raise $5000.00 toward the charity as a gesture to Joey and in recognition of his milestone. 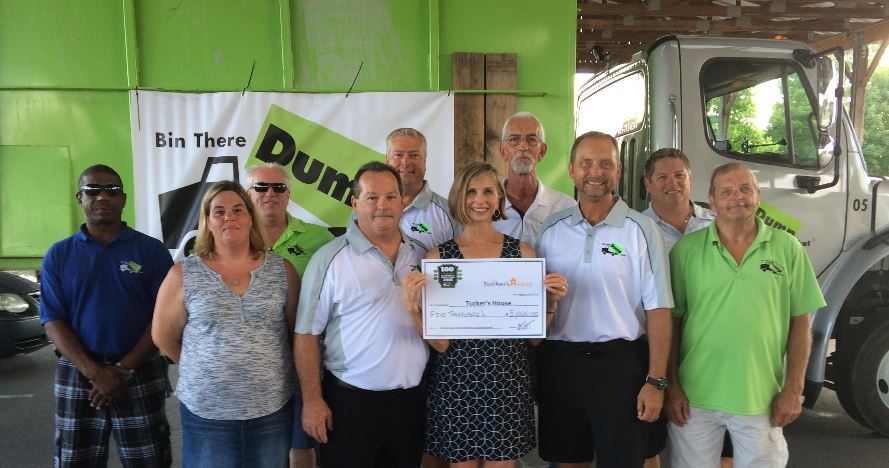 Read more about Bin There Dump That Nashville's celebration from the Williamson Source.

What's Next for Bin There Dump That? 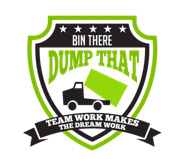 Bin There Dump That is truly a franchise on the move. The New Year has already yielded new locations, expanded territories and the company is exceeding 2016 projected growth. At the annual development conference last February, the Bin There Dump That message was simple – Team Work Makes the Dream Work

This idea starts at the top and makes it way throughout the entire network. New initiatives have been implemented since the 2016 conference such as new digital marketing strategies for all budgets and operation sizes. The playbook for best executing the business model has been improved and all that's left is for the franchises to take the ball and run with it.

As successful as Bin There Dump That has been to date, there are many opportunities for additional growth within the North American waste hauling marketplace.

“We certainly have not exhausted our reach, especially within the United States”, says John Ferracuti. “Areas such as Chicago, New York, and the Bay Area in San Francisco are on our radar and would be an ideal fit for our model. We're always hearing from interested franchise operators and we're interested in finding the best fit.”